He took the name Caplan in memory of his aunt Caplanovich.
Born in Paris on May 24th 1923, he arrived in the high valley of the Aude from Paris where he had worn the yellow star of the Jews.
He received help from Louis Cesari, from Limoux. He was not a soldier and liked reading Russian authors…
He became the leader of the maquis after the loss Alcantara and Riffaut who were both killed, and led the surviving partisans to Courtauly near Salvezines where they joined up with the Maquis Jean Robert.
He was not a fighter, but a dreamer, but he knew how to lead his men and gain their respect. He was firm and resolute but also just.
After the liberation he joined the army in the 81st infantry regiment.

Words spoken by “Caplan” (Jean Miller) on May 29, 1994, in the forest of Resclause, on the day when the memorial plaque was unveiled.

«Each one of my friends who played an active part in the Resistance maintains within his own heart a moment in the history of our country. When all these moments are combined together they produce the big picture which is our history.

I would like now to clear up a misconception which over the years had become a legend, perhaps a tale of my own making that claimed that we were heroes, whereas at the time we knew very little. We were only a group of young men who wanted to live our lives, but who could not live among murderers and this path of action demanded an acute and high sense of the difficulties involved. That was what we actually had.

We were not fighting men but young people with a sense of dignity, or in other words, the will to taste freedom and the right to free expression. 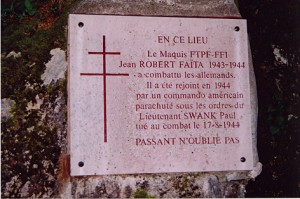 Telling the whole story in such a short time is attempting the impossible. When I realized that I could not be safe in the city of Limoux, I joined the ranks of the Maquis Faita. Thanks to my contacts in Limoux, Quillan and Le Minervois, I reached the Vinsous farm which was owned by the Cathala family. I arrived there on the day before my 21st birthday, an age of hope, sun and love. The little Auguste Cathala welcomed me and I referred to him as being “little” because he looked so young. Then an uncommon and touching course of events occurred as Auguste gave me food. As I already told some of us food was a vital element in our survival. When it became dark they brought me to the maquis, at the site of the maquis’ encampment.

At dawn all hell broke loose when we realized that we were surrounded by the Germans, but the worst aspect of the whole episode was that the militia had guided them to our hiding place. The militia was made up of our own countrymen, who knew the lie of the land and the people, but for us they were not normal fighters. Our forces were dispersed in all directions and little Cathala was murdered. I termed what happened as murder rather than a case of being killed in battle.
The time had come for the maquis to appoint new leaders, but these were young men who had never been trained for combat and they had to keep this poorly armed group together.
When I think back to that episode in my military career in the maquis when all I had was a small 6.35 revolver which was a lady’s revolver, to fight against these well armed monsters… and needless to say I was scared.

If one day someone should tell you that these fighters were not scared, then believe me what they tell you is untrue.» 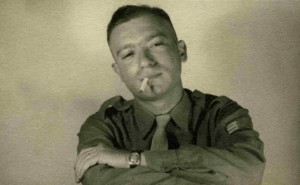