He served for three years in the air force in Syria. One day he tried to join the British on the Euphrates, but the British fired on the French and they withdrew.
Back in France, in Estagel, he underwent a medical examination to check his fitness for the STO. Since he did not want to go to Germany, he decided, following the advice of his cousin from Marseille, to join the French police and thereby avoid service in the STO.
After graduating from the police academy, he was sent to Nimes.
He distributed anti-occupation leaflets. One day, the German police arrested him after they found a package of leaflets hidden under his cape. His superior Mr. Serres intervened and had him released… One day, while he was on guard duty at the old soap factory,where some weapons were kept, he stoled 2 pistols, one a 6,35 and the other one a 7,65. He wanted to give them to the local resistance unit,whose members sometimes stoled weapons from the police. The gestapo ransacked his apartment three times, whihout results, as the weapons had been well hidden, and so it was widely believed that either somebody denounced him or he was seen in the act. Later on, he brought the pistols to Estagel.
Following the search of his house, he was taken to Gambetta Street accompanied by the militia, and to his surprise he learned that he had been taken in for interrogation. He was then arrested and taken to a student room where he seized theopportunity to escape after pretending that he needed to relieve himself. On reaching the freight railway station, the railways workers helped him leave to Narbonne.
There he succeeded in climbing on a truck full of hay, which took him to Salses. He then walked to Estagel and later rode a bike to Caudiès de Fenouillèdes.
Ribero, a teacher of Salvezines, helped him to reach the Maquis Jean Robert.

While passing throught Salvezines, he was given a Royal Enfield motorbike by its owner, who had served as a machanic in the Air Force, but still could not strart the bike. This bike helped him in fulfilling all the liaisons duties.
One evening, Ribero announced that weapons would be dropped by parachute in the region of Le Clat, and the BBC message would be: «The palm tree is an exotic plant». He decided to recover the weapons and a group of partisans were sent to Le Clat to get them.
The field of Le Clat was situated about 3 kilometers as the crow flies from the drop zone( code name:Tunnel), a zone under the responsability of the maquis d’Aunat.
The Planes coming from Algeria had to approach from a southeasterly direction and fly over the area controlled by the detachment of Salvezines first.
That particular night another message was received, stating in code: «14 friends will tell you tonight that the virtue shines in all the eyes». This message announced the airdrop of 14 men. It was intended that they should join the maquis de Picaussel. The Maquis had withdrawn to Quérigut from its position on August 7th,1944, after the germans attacked them. The field of Le Clat was situated on the plane’s flight path. The drop was made on the field. Danton was there and gave the signal to go ahead with the drop: a U in morse. He succeeded in doing so by improvising the signal using the headlight taken from an hold car so that he could make the proper signal.
Three lights were set up so that the planes could drop their containers of weapons. Then came as a total surprise because the men were not expected. Fourteen Americans from the «Peg» mission had just arrived in france and the time was 4.00 a.m. On August 11st, 1944.
After recovering from the surprise, no one opened fire! The encounter with the parachutists was warm and friendly.

Recovering the equipment took some time and after a discussion with Auriol who wanted to keep the weapons, everyone regrouped and the Maquis detachment, accompanied by the Americans, joined Salvezines (In fact they reached the Nicolleau farm).
A few days later when he was on guard duty on the Quillan bridge and after arguing with Bayard (Lajou) about the position they were holding, Garrouste informed him about the fight that took place in the Gorges de Cascabelle, where several menbers of the maquis de Picaussel had lost their lives. He decided to block the return of theGermans who were on their way towards Carcassonne. The choosen place was the Gorges of Alet. Danton, rode on his bike to Couiza, then turned towards La Serpent to join the road to Limoux. At the entrance to the town, he was given some information about the possible presence of the germans.
Leading a truck full of men and explosives, accompagnied by a guerilleros named Cordoba, Danton arrived in the Gorges d’Alet.
Once the spot was choosen (it was called «l’Etroit d’Alet»), along with 5 Americans: Lt Swank, T/3 Claude Galley, T/5 Jean Kohn, T/5 Nolan Frickey, T/5 Rock Veilleux, and about 10 men from the Maquis: Caplan, Montcalm, Moïse, Cordoba, Pépé, Danton and some others, they watched the road stopping any trafic, apart from a car driving a wounded man. According to everyone’s opinion, the occupants of that vehicle informed the germans about the position of the ambush. 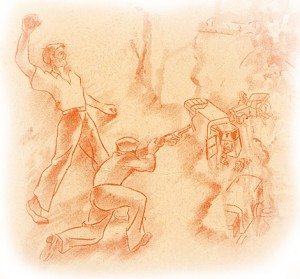 The mission was to blow up the cliff so that it would block the pass and so stop the Germans’ withdrawal.After the blast, the group took up positions on the heights overlooking the road. The result was not the one they had planned. The road had not been completely blocked. Lt Swank and Danton rode over towards the rocks to check the results of the explosion. At the same moment, the Germans who had arrived there were the first to open fire. Danton abadonned the bike hurriedly and joined an American on the slope, Swank and Galley stayed on the edge of the road to cover the commando withdrawal.
They fired repeatedly, killing some enemy soldiers.
After a while, Danton went down to the road to see what was happening and saw the Renault truck they used for transportattion, surrounded by Germans, and also saw the soldiers standing around Lt Swank’s body.
Danton opened fire and went back up the slope to his previous position, under German fire. Goeorges was still there. Suddently grenedes were hurled at them. The American also threw a grenade back but another German one wounded the two of them, Danton was wounded in the leg and Georges in the hand.
Danton hid behind the rocks and covered himself with some branches, hoping to escape the germans. Several soldiers passed nearby without seeing him. He had not eaten for several days and was weakened by his wound. He fainted several times.
At midnight, as the bells of Alet were ringing 12 strokes, the germans walked down the road, gathered around the trucks protected by flour bags, where they were busy talking. 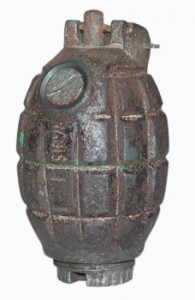 Suddently Danton came close to the cliff and threw two grenades on the road, and then ran to the top of the mountain unaware of what had happened and then passed out again.
The first morning light woke him up, and after having applied a US dressing on his wound, he started to climb again. After arriving at the top, he spotted a sentry and since he did not know his identity, he chose to avoid him and went on his way. By the brook on the other side of the mountain he saw a man in the vineyard and called him over. Supported by women, he was taken to a farm, where he could eat and drink. Some time later, Lt Jacques of the Corps Franc Lorraine came to pick him up.
Jacques took him to a house situated in the region of Alairac. A surgeon tried without success to take out the fragment of metal stuck in his thigh, without an anesthetic, and in the end he stitched up his wound. A man called Nostre-Seigne came to see Danton and told him he wanted him to stay in the «Corps Franc» but Lazare and other friends came to pick him up and took him to Limoux.(August 20th,1944).

On arrival at Limoux, a band and town’s population came out to welcome him warmly. The Americans were also present. Danton was carried on a stretcher by two US soldiers to the butcher’s shop owned by Mr Balateu. Where a huge meal was served to about thirty people, including Maquis activist and Americans. A wonderful meal, he recalls.
After undergoing another operation in Limoux, Danton went back home to Estagel to be welcomed by his wife who did not expect to see him alive again.
Still convalescing, he was called to join the «head quarters» of the resistance in Carcassonne…