Raymond LOZACH, who was also known as LAZARE

Raymond Lozach founded the Association of the Maquis Jean Robert Faita and served as its president until his death.

May 10th 1940
He crossed the Belgian border with his mobile artillery regiment and confronted the enemy tanks that had already crossed the Albert Canal. There he experienced military combat for the first time on May 11th 1940!

May 13th and 17th, 1940.
He received a citation from his regiment before retreating to Dunkirk, on the way to England. There, Lozach met and talked with a friend who was a member of the French Intelligence Bureau.

In August 1940 he returned to France to join his wife in Paris, where the Intelligence Bureau contacted him again in June 1942. (In the meantime, a little girl named Raymonde was born in June 1941)
He left again, this time under a false identity, on a mission to a prohibited zone of the Ardennes. The purpose of this mission was to gain information about German railway traffic (troop movements, war equipment…).
To preserve his secret identity, Lozach found work at a charcoal plant and monitored the railway traffic thus gaining precious information for the allies.

In November 1943, he was arrested in Rocroi and taken to the prison of Loos-les –Lilles.
Lozach was hospitalized after being wounded, and the hospital staff helped him escape. After his rescue he was taken care of in a little village in the Champagne region that was affiliated to the Intelligence Bureau.
Still in 1943, he moved around other departments where he helped different maquis units, and in particular he helped in setting up maquis units in the center of France.

End of 1943: the Bureau calls him back to the south of France, with the intention of sending him to Spain (Fearing for their arrest, his wife and daughter were evacuated around that time.).
As the liaison between the Bureau and himself failed to materialize, he stayed on in the small area of Aude where to keep his secret identity he worked in a wood mill. There, he met up with Commandant Jean-Louis who was responsible for the Francs Tireurs et Partisans Francais (FTPF), and who would also send him on missions in the local area.
Later on he joined the maquis where he met with the men whom he was to be command (meanwhile he was appointed to be an officer).
He grew to love these young men who formed the maquis, as these young French men did not want to see France polluted by the Nazis, and consequently died fighting for their country.
All the time that he spent in Aude, he led his men, and organized ambushes against enemy convoys. He and men welcomed the American parachutists and looked after their needs in the mountains. In this area, many roads were blocked, as the maquis’ main objective was to prevent the German troops from using the road to Toulouse and Perpignan. Their orders were precise: Stop any German convoy on this road and so many clashes with the enemy took place there. American commandos supported the maquis to a considerable extent here. 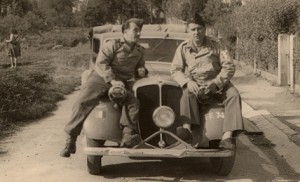 On August 17th, during a fierce fight with a German convoy with 150 men, Lieutenant Paul Swank who commanded the American commandos died a heroic death. The passage of the German troops along this road was subsequently blocked.
Lozach participated in the liberation of Carcassonne and Narbonne, and then joined his wife and daughter, who had been hidden in a village of Aude (his 3-year-old daughter was very well known by the maquisards!)
With the agreement of his understanding wife, he again joined the De Lattre’s Army in Tassigny and during the winter of 1944/1945, he participated in several different battles in Alsace.

On April 1st 1944, he crossed the Rhine, and contributed, after different battles, to the advance of the First Army into Germany.

On October 12th 1945, he was released from his duties at Beziers.

Recruited by Frederic Joliot-Curie in 1950 at the College de France in Paris, he pursued his professional activities as a technician at the IPN of Orsay, until 1980.
He considered himself privileged and fortunate to be acquainted with Frederic and Irene Joliot-Curie and their children, Pierre Joliot and Helene Langevin-Joliot. 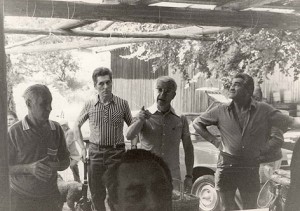