I was born on October 2nd 1924 in Perpignan.
I was studying pharmacy at the time and did not like the Germans very much as I thought there were too many of them.
As there was always a risk that I might be caught up in a raid and sent to Germany, my brother-in-law, a gendarme, advised me to join the maquis. I accepted his advice and together with Moïse, my nephew, left to join the maquis, taking no luggage with us.

When we arrived in Prades, my brother-in-law sent us to one of the partisans.
We went to the col de Jau, where we stayed until the gendarmes found us and ordered us to leave the area. We escaped to the Roc du Roussillon between Mosset and Rabouillet.
We received supplies from the local resistance.
There were Moïse, le Lièvre (whose feet froze later on when trying to get through to Spain), Marceau (André Bonnet), Marin (Yves Fosset), Campommier and myself.
I was named Prosper because in the Pyrenees Orientales a man called Prosper had been killed and they had to replace him.
Life at the Roc du Roussillon was very hard, as we only bread and some cheese to share between us every week.
After some time, we decided to leave and look for somewhere else.
We lived in a shack, took some sheep and left to travel around, without a watch, any maps or a compass.
I remember that during this time I caught a trout that we had to share between the 5 of us!

We reached Rouze and Mijanes we found a man who led us to the maquis.
The leader was Firmin, and the group included René, Paul (his brother), Pervenche and Octave.
One fine day, two well-armed Spaniards who did not like the group, showed up at the camp, behaving suspiciously and left almost immediately just as they came.
A short while after that the Germans attacked us.

The camp was situated about a fifteen-minute walk from the edge of the forest. After my watch was over Pervenche, relieved me and, Marceau warned us that the Germans were approaching.
Nobody wanted to warn Pervenche,so I decided to do so and returned to the post, but in the meantime, he was gone. I took the weapons and left.
After about 1km, I found Moïse who had been waiting for me. We walked throughout the long night in the snow until we joined the Maquis Jean Robert.

One day, the message “le palmier est une plante exotique” (“The palm tree is an exotic plant”) came through and this meant that a parachute drop was scheduled for the following night.
We found a truck and two cars and headed for the drop zone. We prepared the flares and waited.
When we heard the plane, the fires were lit and the signals given.
The plane dropped its containers, one or two parachutes did not open and the containers broke open.
Suddenly a second plane arrived, following the signals it dropped containers as well. This time, there were also paratroopers and the comrades started to shout:
“Don’t shoot, they are Americans!”

I was aiming at one of the Americans with my old Mauser of 1870 and when I spotted the US flag on his shoulder, I lowered my weapon and we became friends. He offered me some whisky.
There were too many of us, so the Americans left first and the cars returned to collect us later on. 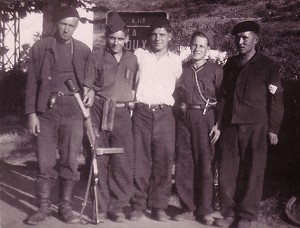 In the photograph, with Marti and the Russians, I have a 7.65 revolver on my belt that I took from the adjutant at the gendarmerie of Limoux during the attack there.
We were at the gendarmerie when the officer tried to escape so I recaptured him, tied him to a tree with his own handcuffs and took his weapon.

I was very moved by Marta’s death because I knew him so well and he died in front of my own eyes. 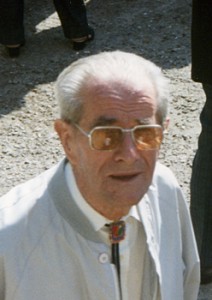