Pierre Killinger alias Keller was born on october 7th 1921 in Trinbach (Alsace).
In 1942, the Germans mobilized Alsatian military classes 19-20-21-22, by threatening to deport the families of those who would be tempted to escape. I was mobilized on October 7th, 1942 (I was then 21 years old).
We were led to Rostok, northern Germany. For three months I received a military formation. Then I was affected in Stuttgart in a cavalry regiment, which was, in fact, a regiment of scouts (aufklärungs abteilung 18) for three months. Then we were sent to the Russian front line. First it was Kuban close to the Black Sea, then Dnipropetrov’ K .
Our mission was to cover the withdrawal of the infantry. It was the beginning of the end, a real butchery, a total horror, many dead; the screaming wounded ones, shells and bullets pouring down. Most stressing was the shooting of rocket launchers followed by the rain of rockets. 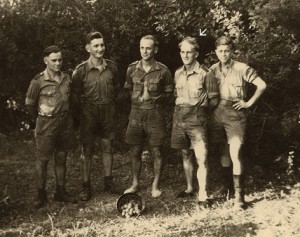 The situation was getting worse and worse, I decided to shoot myself in the foot to get away from this hell. I hid behind a bush, put some black bread on my shoe to avoid the powder traces, and took my Mauser. The bullet went straight through my left foot.
After being taken care of, a medical nurse told me to go to back again where I would find a motorcycle combination used to transport the wounded to the field hospital towards. While walking I saw blood pouring out of my wound at every step I took.
I found the motorcycle combination already charged with three or four was wounded soldiers, I got onto it and we rode to the hospital of countryside. There, after having received some care, I finally could rest and sleep lying in the straw.
Later on that it happened on November 1st, 1943.
When asked how I got wounded, I explained that I got shot in the foot while trying to jump into a ditch.
I was sent back toward Odessa on a plane, a Junker 52. I remained there for a few days, waiting for a hospital train going to Germany. When the train arrived I got on to it with a friend. We were each given a label, LZL (liegend) for me and LZS (sitzend) for him. We understood the meaning of it when we were separated. LZL for lying down traveller, LZS for a sitting one!
We arrived at Lemberg (Czech border). I was hospitalized for 1 month and went back to the company to regroup the regiment in Stuttgart.
I was sent by train to Prague, and then sent to France. During a stop in Avignon, following an air attack, the desire for deserting began again to me, and on the council of a railwayman, he said me to go further possible, i.e. towards Béziers . I continued and we were affected to Saint-Pierre.
There I met Gustave Lucille , who was responsible for the supplies by German. Since I spoke French, my captain asked me to Mr. Lucille to go and buy the supplies. After gaining the trust of Gustave, it met with Eugene and Mr. Siné (the nursery gardener) who helped me obtain forged identity papers.
After getting rid of my uniform I put civil clothes, I deserted and am checked into the Sala hotel, during 48 hours. The Germans were also in the hotel, I saw them passing under my window.
On the third day Gustave took me to the road leading to Saint-Estève, there I waited hidden in the bush. Later on Gustave and his wife took me into an ambulance and drove me to Saint Paul de Fenouillet and Caudiès. 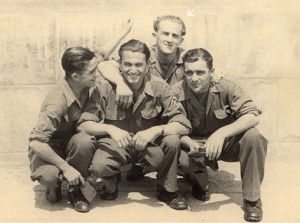 There someone led me to the maquis. After fifteen days to quarantine, I was allowed to join the maquis. It was in June 1944. 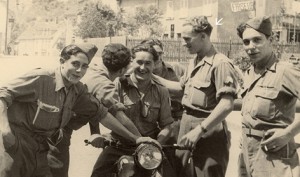 The various adventures lived with the maquis and the Germany war continuation, are, compared to what I have known with the German army in Russia, without common measure. Life on the Russian front line was very hard, we were dirty, covered with lice and death was constantly present. Twice the Germans hold my mother I had disappeared. Imagine her surprise when I suddenly reappeared. Following my desertion Germans searched me all the area. Fortunately I could their escape from it.

Keller and La Vache (Marchal Eugène on the left)