In 1941, I was a militant in the communist party in Narbonne. Together with some friends, we distributed leaflets and were arrested by the French police for doing so. We received different sentences. I was sentenced to one year in prison at Montpellier, while others were jailed in Nîmes and several others were deported. The men jailed in Nimes would eventually become the leaders of the regional maquis.
On the day of my release, the chief warder sent me to the police headquarters to get my food rations card back. One of the police departmental managers talked to me and said: “Son, go back home and you know what you have to do…”, he repeated this two or three times…
The gendarmes came to take me and sent me to Quillan, where I went to work at a bakery shop.
Sometimes Marta came to see me and I used to give him some bread secretly.
He was coming down from time to time to make contacts accompanied by someone called Lulu.
After some time, I joined the maquis as I feared that I might be taken away in a police raid. When I arrived at the maquis’ base, Marta asked me for my nom de guerre and since I did not have one, he called me Marti!
The leader of the maquis, known as Gaston was very tough and always carried a revolver in his hand!
It needed discipline to control all these young people.

One night we drove in two cars, Lazare and myself in the first one, Danton, Caplan and Louis in the second one. As we were driving along the road looking for an armed collaborator in Rennes les Bains, we ran into a German roadblock at the entrance to Couiza.
One of the soldiers approached the car, I fired with my sub machine gun and he fell down right on the car door. Instantly the Germans opened fire, the windows blew out, wounding me slightly in the back since I was trying to open the door that the dead German was obstructing.
Louis also opened fire at the risk of hurting Lazare and me. Everyone ran away under the German fire and abandoned the cars where they were. I opened fire again and ran over to the cemetery, falling several times. When I arrived in the woods I saw several men and said to myself: ”Oh! Germans!” but in fact they were Caplan and Louis. It was late and although it was after nightfall we walked through the mountain. We arrived at Lapradelle early in the morning.
The skirmish was a brief one but the Germans kept firing and in the end they set fire to the cars.
Another little story concerns the second car that was confiscated by Lazare, when we went through Quillan, from some young people who were pretending to be partisans; unfortunately that car did not get very far!

Jean-Louis was the commander of the 3 companies. He knew all about the landing. We were about 15 all together (Jean-Louis, Danton, Rousseau, Soulié, Lazare, Ratabouil, myself and some others…) and we left in a little truck and a few cars to a place called Plan Prunier near Clat. We took up positions and prepared fire signals.
At about 1 a.m. we heard a plane and lit up the dropping zone. After circling for a while the plane dropped its containers. We were busy recovering the equipment, when we heard a second plane coming. We lit the fires again and the plane dropped its load. They were the Americans!
I had to step aside so that one of them would not fall on me. As soon as the American got to his feet he asked me for the password, holding a Colt 45 in his hand. I could not answer, I only said:
“Le palmier est une plante exotique” (“The palm tree is an exotic plant”) that was the message announcing the parachute drop.
“That‘s not the password”, he answered,
and then I shouted “Forces Francaises de l’Interieur”,
he shook my hand!
I also shouted: “Don’t shoot! They are Americans!”
Fortunately the night was clear and nobody opened fire.
I then took him to Jean-Louis.
We left for Salvezines

Regularly, I accompanied Danton on his motorbike and this particular day as I was spending some time with a girl, I did not go. When they called for someone to join the group, Frédo shouted, “He is not here, I will go instead”. On his return Pépé gave me hell!
There were Lazare, Moïse, Danton, Montcalm, Pépé, Cordoba and others plus the Americans.

We were on our way on a mission to Saint Paul de Fenouillet, and there were five of us in the car: Lazare, Prosper, Moïse, Marta and myself. On the road, we saw a car approaching, which we thought was a German car. We stopped and got out of the car to take cover.
As Marta got out the revolver that was under his belt, fell out and went off. The bullet entered his head and he died instantly.
We brought him back to the camp. When we arrived, the Americans who were there gave the order to the officers to present arms.
Marta was a very good friend of mine…

Life in the maquis

In the evening, in the camp, we sang and the atmosphere was very pleasant.
Lulu had a beautiful voice that sent shivers down our spines! Bonnot also sang.
At nightfall, we used to go to the house in the woods and in the morning head back to camp.
Rouvier prepared coffee and as he was about 60 years old he was our cook. The menu was the same every day: Pasta…
So every day we were singing: “Pasta a la Rouvier, we are fed up eating it!”
Poor Rouvier! He was so kind to us!

Capture of an armed collaborator

Danton, Marta and I left for Quillan in order to capture an armed collaborator whose name was A… Danton wore a police uniform to help us approach our target and he asked two girls who were friendly with this armed collaborator, if they could give him some information about the maquis. One of them, called Eliette, told him she had a rendezvous with A… at the Terminus bar, by the station.
We decided to go there to capture him. We decided that I would enter by the front door and Marta from the rear entrance. I entered the bar and as soon as our target saw me, he tried to draw his weapon. Fortunately for us, his weapon was a revolver and his clothes prevented him from taking it out quickly enough, so that we arrested him and brought him back to the camp.
The next day he was shot at the Nicoleau farm.
Another collaborator was shot at Saint Paul de Fenouillet. M…shot him
The third collaborator was from Montfort and he was shot as well.

Once, Lazare and I went to Tuchan, stopping at the entrance of the village where we left the car.
We saw a vineyard with beautiful grapes and as we were hungry we sat down to eat some but soon a farmland ranger came and got angry with us.
He said, “What are you doing here? I am going to report you!”
I answered:
– “ I am hungry and I want to eat something!”
– ” Leave immediately!”
– “ Wait!” I told him
I went to the car, took out my machine gun and asked him,
– “Do you know what this is?”
– “Please then continue eating!”

On another occasion, Jonquille and I, on our way back to Salvezines at about 2 a.m. saw a truck full of men approaching at La Faurie. Thinking they were Germans, we climbed a slope and prepared to throw grenades at them. In soon turned out that they were partisans. We were left with a dreadful feeling! 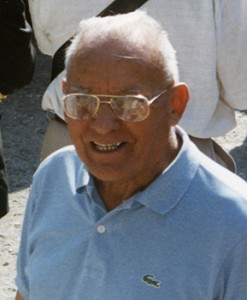